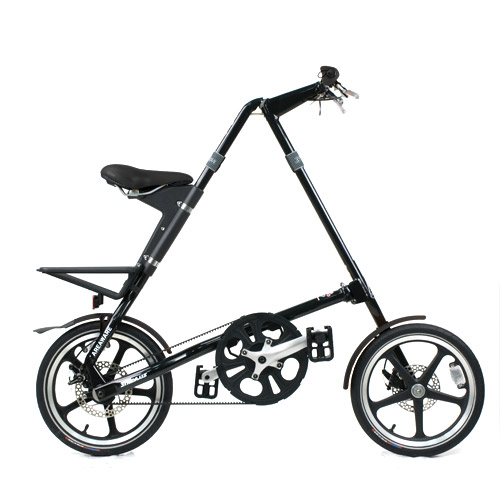 Supplies are very limited. If a folding bike is in your holiday gift giving plans, order now!

But the extraordinary asset that the Strida offers is its five second fold; it changes the way you use a bike. I used to carry a lock that weighed more than my bike and still worried about whether it would be there when I got back. Now that Igor the bicycle thief has been arrested the rate of theft has dropped significantly, but with the Strida I don’t bother even taking a lock much of the time- I just fold it up and take it inside. If anyone complains (only one store has) I ask if they allow baby strollers into their store- the Strida doesn’t take any more space. Instead of being a mode of transportation that has to be parked, it becomes the latest fashion accessory.

I think that it is also a game-changer in that it is so easy and quick to fold- you treat it very differently than a normal bike, you take it into places that even a normal bike can’t go. Folded up, you can push it like a stroller; TreeHugger founder Graham Hill hangs his up in a closet.

I can fold it in five seconds and I can pack it in its travelling bag in 30 seconds and am taking it to New York again this week, and to the Greenbuild conference in Boston in November- it is that quick and easy.